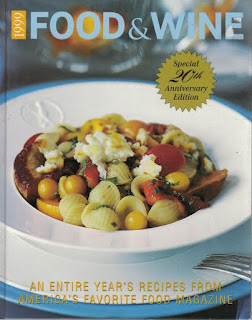 About the Book
Food & Wine is a monthly magazine that has been published since 1978. This cookbook contains all of the recipes from the 1998 issues of the magazine and celebrates their 20th anniversary. It also includes the 20 best recipes published in the magazine during that time.

I bought this cookbook several years ago. Before my challenge I had not cooked anything from this book--I assumed that it was a bit too sophisticated for my skill level and for family meals--so it has been tucked away on my shelf since I bought it.  When I was looking through it to decide which recipe to make I was surprised at how many were family friendly, in line with my cooking skills, and did not require any knowledge about wine.  I have several recipes flagged to try in the future!

The Recipe I Chose To Make
I decided to make the Bittersweet Chocolate Tart from page 394.  The forward of the cookbook highlights this recipe as the 'favorite of the favorites' from the first 20 years of Food & Wine magazine.  The recipe is from Joël Robuchon who was named "Chef of the Century" by the guide Gault Millau in 1989 and is the world's most Michelin-starred chef. 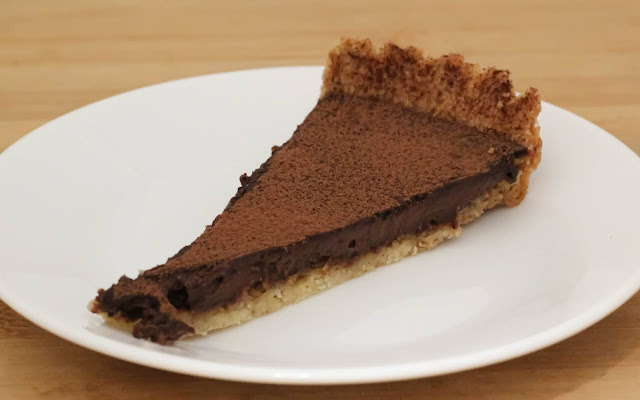 How Was It?
Delicious.  Absolutely delicious.
The unique crust is made with almonds and vanilla beans and the custard is rich and chocolaty.  There are several steps to the recipe but they are explained very clearly so the tart is relatively easy to make.  I thought I messed up the crust (not uncommon for me) but it is a forgiving recipe and it turned out perfect.

What’s Next?
The next cookbook in my Cook the Bookshelf Challenge will be Air Fryer Perfection from America's Test Kitchen.

Click here for previous recipes made in my ‘Cook the Bookshelf’ challenge.