May 19, 2020
Cookbook #7 in my Cook the Bookshelf Challenge is  Southern Living Cooking Light by Susan M. McIntosh. 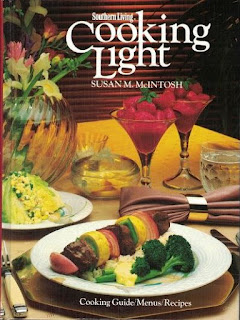 About the Book
This book is the very first Cooking Light Annual Cookbook!  The recipes are from the Cooking Light column in the 1982 Southern Living magazines and were compiled into a cookbook published in 1983. Cooking Light eventually became it's own magazine in 1987.
I bought this cookbook at the Pawtastic Thrift Boutique on Miracle Mile in Stockton, a great local store that supports local animal rescues and sells all books for only $1.00!
I had previously made the Brandied Cherries Jubilee recipe from this book.

The Recipe I Chose To Make
I was feeling adventuresome and decided to make the Cappuccino Souffle from page 74. The recipe called for semi-sweet chocolate, instant espresso/coffee powder, cinnamon, and eggs. 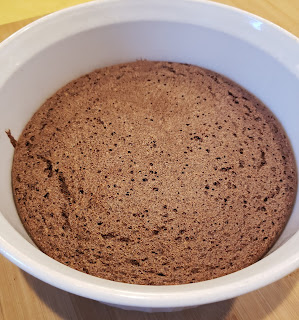 I have never made a souffle at home, only during a cooking class and that was years (decades?) ago.  I was feeling confident and followed the directions carefully.  The kitchen smelled delicious as it was baking and I was anxiously waiting for the timer to go off so I could show it to my family and take a photo of it before it fell.  Unfortunately it never puffed.
Despite never puffing it tasted delicious.

What’s Next?
The next cookbook in my Cook the Bookshelf Challenge will be 365: No Repeats by Rachel Ray.