February 23, 2011
Tonight I made Chipotle-Orange Chicken Cutlets and Skillet Onions, Peppers, and Garlic, both from my Cooking Light Annual Recipes 2007

I really liked the chicken but thought it was a lot of work.  Big Girl and Little Girl liked it, but not so much that they made 'mmmmmm' noises when eating or wanted seconds.  The boys had to be coaxed into eating theirs, but did eat it without too many complaints.  Mr. Coffee thought it was OK but this would not be on his list of dishes he would want me to make again.  The main turn-off to the family was the sauce, they thought the orange and chiptole flavors were a bit odd together.  I thought the sauce was delicious but I tend to be a fan of sauces, especially the odd & unusual ones. If I were to make this again I would cube and saute the chicken then add the sauce and skip the orange-juice and flour dredging entirely.

The peppers and onions were very tasty, but also very basic and probably something that does not require a recipe.  Sauteed peppers are not something I have thought of for a side dish and I will probably serve them again. 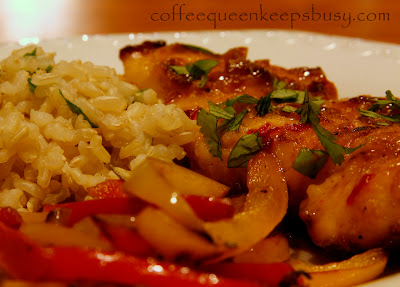